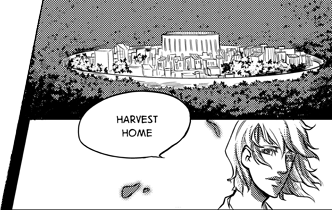 Harvest Home is an original English language manga based upon the conventions of the shōjo (girls’) genre in Japanese manga. It is intended for fans already familiar with the manga/anime genre as well as for young adult readers who might be attracted to manga for the first time. A “Parents’ Advisory” attached to it would be “Older Teen.”

A sleeping boy in a glass coffin is transported to the outer walls of a circular city. As soon as he is awakened and released, he is forced to run through a terrible no-man’s-land patrolled by The Lone Gunman and his demonic dogs. Once inside this menacing city, the boy discovers that he has lost most of his personal memory. Like the other students, he can’t even remember his name. Then, to make matters worse, he finds that he has been mistakenly assigned to Harvest Home—the girls’ dorm.

Manga readers will find much that is familiar—“Oh, I’ve been here before”—but also startled by new twists and developments. The setting—a boarding school—and the central characters—middle school kids—should be familiar, but the school is a dystopian version of a North American high school and the students are North American kids. They have been kidnapped—snatched from their ordinary lives back in what they call “The World.” They don’t know why they have been brought to the Academy, and no one will tell them. No one can escape, and those who try, are killed. These kids have to work out their own salvation, torn between violence and love.