MORGANTOWN IS NOW AVAILABLE AS AN E-BOOK. 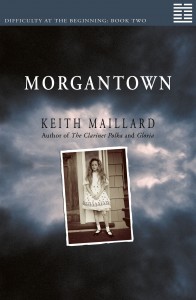 Of my novels, Morgantown is my favourite. It’s hard for me to say exactly why; others are better written, more mature. I suppose it’s a matter of feeling. The characters in Morgantown are kids in their early twenties. Their highs are stratospheric, their lows are in the pits, and everything matters. I love their intensity.

THE OWNER of The Seventh Circle had known enough Dante to come up with the name for the place but not enough to decorate it accurately–not evoking terrifying iciness, the absence of heat or light, but rather the most banal, man-in-thestreet conception of hell: cartoon flames, demons with pitchforks. A grinning Satan with horns and tail presided over the bar; he looked more like a Budweiser Beer commercial (and indeed he was raising a tankard of something to his lips) than the Prince of Darkness. But the Circle had, in some obscure and disgusting way, become a kind of hell for me, one totally lacking in grandeur, a perfect Morgantown hell. It’s where I’d sit by the jukebox night after night, pumping in my quarters to hear “Mule Skinner Blues” or “Everyday,” drinking quart after quart of weak West Virginia beer until I was running to the can every five minutes, watching the beautiful young coeds on the dance floor circle by with the fraternity boys. It’s where I’d stumble, so drunk I’d be exploding with unused talk, through the circle of tiny interlocking rooms (all painted red, of course) looking for somebody, anybody, no matter how stupid or boring, to share a beer with—where I would see, reflected in a mirror across a press of people, Carol pass by with her wretched Englishman. And it’s where I and a few of my cronies would sit till closing time constructing conversation like a madman’s scaffolding hastily into the upper air–existentialism, pacifism, theosophy, Jung, alchemy, the Cabala, Sartre, Camus, Heidegger, Jaspers, Husserl, Wittgenstein, Rilke, Kerouac, Ginsberg, Snyder, Henry Miller, T. E. Lawrence, D. T. Suzuki, Zen, the I Ching, the Tao Te Ching, the Steppenwolf, the Outsider—to have collapsed as always for me the next morning, my hangover screwed tight as a watch spring ticking away my wasted time, debris littering a barren plane, my metaphors mixed and me late for class, and then all of it, all of my tricks and disguises, would seem in that awful morning light the shoddiest of effects, a fucked-up sleight of hand attempted by an incompetent charlatan. Revington was staring into the ruddy gloom with his eyes narrowed to slits. “Christ,” he said, “it’s crowded.”

“Everybody getting their last drunk in before classes start,” I said. I loved the Circle most on weekday nights near exam time when it would be nearly empty except for me and those few other diehard souses who really needed a drink.

“Gentlemen, good evening.” A woman’s voice behind us. We turned, and there was Marge Levine who must have come in just after us. “Hey, John,” she said, giving me her brief flick of a smile. She’d met Cohen and Revington when they’d come down to visit me last spring. “Bill,” she said to Cohen, “great to see you.” Then she deliberately turned to Revington, smiled and said, in an amused voice heavily weighted with subtext, “Revington.”

“Levine,” he said, inclining toward her from his picturesque height. “Here’s looking at you, kid.” Their hands touched briefly, a brushing of fingers, his pale and bare, hers black and gloved.

Marge had drawn emphatic Nefertiti lines around her eyes as she usually did; that evening she’d also painted her eyelids a virulent green. In the dim red gloom of the bar, her face looked mask-like, an effect that both pleased and distressed me. She’d undone the toggles of her unremarkable car coat, revealing beneath a black wool dress so unadorned and matronly it would have been ugly on anyone else; her hip bones showed through the skirt like knife points. She was startling as always, in black nylons (no one else on campus wore black nylons out to a bar), and pulled to one side of her head, so unlike her that it had to be a deliberate joke, a velvet beret. Oh, I thought, remembering, it’s Carol’s. “Hey, buddy,” she said to me, “when did you get back?”

“Maybe we can find a table.” She pushed through a knot of students, her body a lean tension balanced on high heels, and I trailed after her, saw her give Revington another thin smile. I loved the noise and press of the crowd, loved seeing girls all around me—but even as I felt a surge of elation, I knew how treacherous it was. I didn’t care. I was going to get pissed.

Jammed into a corner, knocking back my first beer, I told Cohen, “My God, Bill, sometimes the world sizzles like a frying pan. It’s incredible how the days can pass like bland beads on a string, with a deadness so total you forget completely there’s anything else, and then… WHAM… it hits you again. The power. Like that drunk old man in the bar in South Raysburg told me… that Bodhisattva: ‘Son, you’re never late.’ I keep forgetting it, keep thinking there’s somewhere else I have to be, and then I miss it. The power turns off. But when it’s moving… the clarity…”

“Yes. Clarity, that’s it,” he said. “Mornings when I walk through the Yard and see, really see, the branches of the trees, outlined so clearly, so sharply…”

“Yes, yes. Even the power lines right outside my apartment… just to be able to see them. As though the quality of light… I don’t know…”

“As though the light’s alive.”

“That’s right. That’s exactly right. But why can’t we stay there all the time?”

“If it’s going to happen, it’ll happen,” he said. “It’s something given to you.”

“What do you do when it goes away?”