NOW AVAILABLE AS ON KOBO AND KINDLE

Evan Carlyle, a b 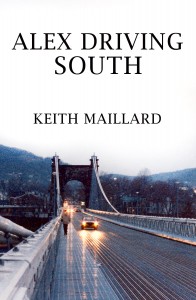 right young man on the make who emigrated to Canada during the Vietnam War, returns to his hometown and runs into the last person he wants to see, his old buddy, the legendary hell-raiser, Alex Warner. Evan’s life has been a series of successes; he has a flashy girlfriend and makes good money as a producer for CBC Radio. Alex has not been so lucky; he’s trapped in a dead-end marriage and owns a failing service station hit hard by the 1970s energy crisis.

Fueled by several cases of beer, these two head south in a snowstorm in an attempt to recreate their lost glory days. Inevitably they must confront unfinished business from the past, including their haunting memories of Elaine Isaac, the wild girl they both loved in high school.

Alex Driving South is on of Keith’s first novels set in the “part-real part-fictional” town of Raysburg,  modeled on his hometown of Wheeling. A story of a past that cannot be forgotten or forgiven, of courage and betrayal, and of coming home to Appalachia, Alex Driving South is now widely regarded as a foundational work in West Virginian literature.

“A novel whose passionate and afflicted world is splendidly realized.”

Adele Freedman, The Globe and Mail

“A richly textured, deeply felt story… funny, vulgar, sad, wise, and at times brutal… This one is a real treat.”

Although it was published second, Alex Driving South is my first novel. Its two major characters—Alex Warner and Evan Carlyle—first appeared to me in a long angst-ridden story I wrote when I was sixteen, the title expressing one of my most fervent adolescent desires—Live for the Night. Although Evan is in his twenties, he’s still living at home with his parents, but, within the first few pages, announces to his mother that he’s moving out to become a writer. She tries to talk him out of it, doesn’t succeed, and he finds himself in a ratty apartment in Center Wheeling. We’re never told where his money’s coming from—largely because I didn’t have a clue. He spends his time writing beat poetry and hanging out with Alex Warner—a hard-drinking, fast-driving, bad-ass garage mechanic who represents my ideal West Virginia boy, just as the narrator represents some romanticized version of myself, grown-up and beat.

Many of my fictional people vanished almost as soon as I’d created them, but Alex and Evan wouldn’t go away. As I moved from high school to university, they matured right along with me; they lived in various drafts of various stories over the years, became increasingly grounded in something resembling a real world, and eventually, as characters always do if they’ve got any juice to them, separated from me and took off on their own. By 1965, they had appeared again in a draft of an honest-to-God full-length novel with a wonderfully pretentious title—The Rest Is Silence—that was rejected by twenty-six agents and publishers. My favourite rejection read, “Although this book has much strong, even powerful, writing, we feel that concerned as it is with an almost mindless violence, it would not be successful in the marketplace.” I’m still puzzling over that one.

By the time I began working with Alex and Evan again in the early 1970s, they’d come a long way from their origins. Alex had stopped being any version of an ideal anything—had matured into a dark, complex, and flawed character. Once I’d cut Evan entirely loose from any connection to me, he’d morphed into a self-serving jerk. I had titled the first draft of my book Alex: Driving South. My editor at The Dial Press said, “It sounds like an academic paper. Take out the colon.”

When I received the advance copy of Alex Driving South, I held the book in my hands and wept. I couldn’t believe it. I’d been living with Alex and Evan for twenty-two years, and they’d finally made it into print.

Evan looked—a huge, muscular man in faded coveralls, short curly black hair, grease on his hands—and then he remembered. There was no way he could have forgotten that pleasantly ugly face and those expressionless brown eyes so pale that they were nearly yellow. “Alex,” he said. Then: “Christ, you look different. You’ve gotten heavier—” Not as though Alex Warner had gone to fat, rather that the boy in Evan’s memory had been worn to the bone and the man who stood there now was massive. Well, here he is, Evan thought, the one person in town I didn’t want to see. “You look fit,” he said uneasily.

Alex laughed; that is, his single short bark must have been intended as a laugh—“Haw!”—harsh, like a crow. “Fit, my ass! I’m burning out faster than a racehorse. . . . But shit, man, you look young. You look like a fucking college kid.” And again Evan regretted his whimsical suit with its curved lapels and flared pants. Dana had talked him into it; theatrical lady, she loved playing dress-up as a party game, had been at him for months over his flannel shirts and baggy pants—his “leftover sixties conservatism,” she said. They’d bought the suit the day he’d heard that his contract had been renewed; he wore it now because it was the only suit he owned. He should have known how it would look on the streets of Raysburg, West Virginia. “Yeah, you really look young,” Alex was saying. “I didn’t know you till I damn near run you down. Come on, I’ll buy you a drink.”

It’s been over ten years, Evan thought, thirteen years, to be exact, since I’ve seen him. Do I want to have a drink with him? What could we possibly have to say to each other now? But Christ, there’s no way in hell I can get out of it.

He had planned to fly in from Toronto, pay a duty visit to his parents, and fly out again, untouched, unmoved, detached as an anthropologist. Worrying about it on the plane, he had decided not to see Alex at all, to keep him fixed in the past, set into those surreal nights that spun in memory like pinwheels: both of them sixteen or seventeen or eighteen, careening from bar to bar in Alex’s truck, getting drunk and then drunker, trying halfheartedly to pick up girls, and always ending the night by driving south with a case of beer between them on the seat. Driving south to look at the fiery open-hearth furnaces that burned hellishly (no other word would do) out into the West Virginia night. That’s where Alex belonged, Evan had decided, pushed firmly back into the mist of nostalgia that was growing over his high school days—“The Old Friend,” a piece of the legend, the central figure in his stock of down-home stories to be trotted out at dinner parties with Dana urging him on: “Hey, tell them about that crazy guy you went to school with. The one who stole all the cars. What was his name?” Alex Warner was his name, and now here he was, a grown man, solid and grinning. At least that cracked, ironic grin hadn’t changed in thirteen years.