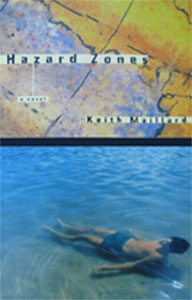 Hazard Zones is a contemporary take on my fictional town of Raysburg, West Virginia (contemporary for the time that I wrote it—the late 1990s). Larry Cameron, another of my protagonists who is the same age as I am, goes home to Raysburg because his mother is dying and discovers, as many of my characters do, that there’s a nasty bit of unfinished business from his past he has to confront. I wrote the book quickly, over the course of a summer, and thought of it as “a short funny book about death.” Reading it again recently, I see that’s it’s about many other things too, primarily about the experience of people who came of age in the crazy 60s—as one of my characters calls them, “the adult survivors of damn near everything”—how they reassembled their lives afterward, found jobs, settled down, got married, had kids.

Hazard Zones was published to absolutely no fanfare but went on to get short-listed for the Canadian and Caribbean section of the Commonwealth Literary Prizes. I’m pleased with the book. It did pretty much everything I wanted it to. It’s out of print.

The last time I saw my thesis advisor at Harvard was when he called me in to see what the hell I’d been doing all the previous year. (He hadn’t got even a postcard out of me.) “Bring everything with you,” he said ominously, “everything.” His name was Bill Morrison, and he was a good geographer and a good man. When I’d still been behaving like a graduate student (rather than my high sixties incarnation as a hairy, incoherent, and hopelessly irresponsible mutant), he’d had me over to dinner to meet the wife and kids—and most professors don’t do that. His field was perception studies, and he’d done some brilliant, ground-breaking work back in the fifties. He was a man I respected, and would have emulated if I could have figured out how to do it.

I brought everything with me. We went into an empty seminar room and spread it out on the table. As soon as he saw the masses of paper, he began to smile. No, the problem was not (as I’m sure he’d suspected) that I’d been doing diddly-shit; the problem was that I’d gone wandering off onto some lunatic excursion of my own and had done far too much of all the wrong stuff. “I’m thinking of changing my thesis topic,” I said.

He did not want to hear that. “To what?”

“Well, I’m not really sure… Maybe a regional study, ah… Ohio River settlement, ah… changing cultural landscape, ah, you know, a morphology. I’ve been collecting a lot of material about the development of the iron and steel industry on the Ohio River—”

“Oh, God. What happened to your hazard study?”

“Well, the preliminary research is all right here. I mean, it could fit into the overall, like, you know, the overall picture. I’ve been reading Barrows—”

Harlan Barrows was an American geographer who’d died only a few years before. He was one of the great cross-disciplinary geographers who kept widening the scope of the field. I’d just come upon his work, and I’d been devouring it like holy writ. “You know,” I said, “his thing about, ‘It’s not the human fact that’s geography, and it’s not the environmental fact—it’s the relationship between the two.’”

That formulation—simple as it is—had begun to resonate in my mind like a Zen koan; I kept having the feeling that everything in the universe was implied in that formulation. I was smoking a hell of a lot of dope in those days—not to mention a couple forays into the weird and wonderful world of acid—and I had begun to see, so I thought, how everything was connected to everything else, and I had experienced a mystical vision of the triumphant expansion of geography into every other discipline under the sun. Geography eats up psychology—chomp!—and anthropology—chomp!—and, wow, there goes sociology and ecology—chomp, chomp! Geography accounts for everything. Geography reunites the sciences and the humanities. Geography saves the world.

To do my small bit to contribute to the glorious and infinite expansion of geography, I planned to do a total study (by total, I meant total) of the Ohio River Valley. I would begin with the natural landscape, bring in the first settlers and the creation of the cultural landscape—or maybe I should start with the Indians—but anyhow, I would describe the complex interactions between the evolving natural and cultural landscapes…

Dr. Morrison had extraordinarily black, bushy eyebrows. They almost had a life of their own. As I’d been talking, they’d begun to jump up and down on his forehead. Watching his eyebrows was so distracting that I had trouble hanging on to my train of thought. “Stop,” he said.

“All right, Larry,” he said, “maybe you will write a big book someday, but, in the meantime, why the hell don’t you get your Ph.D.? Look, just go back and do the rest of your hazard study. Write it up. Compare it to previous hazard studies. Respond to the criticism, stand your orals, and you’re finished, okay?”

I looked at him in wonder. It was so easy I knew I couldn’t possibly do it.