LOOKING GOOD IS NOW AVAILABLE AS AN E-BOOK. 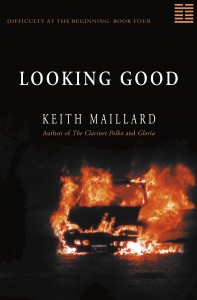 This, the fourth volume of the Difficulty at the Beginning quartet, bears only a tenuous relationship to the version of John Dupre’s story previously published as the second half of Cutting Through (1982). It has the same cast of characters, but they have grown and changed enormously since their first appearance in the world, and their stories have changed just as much. I regard the Cutting Through version as little more than an uneven collection of rough preliminary sketches and notes, mostly now abandoned; what little I did retain, I developed and elaborated far beyond anything implied in the original writing.

Many of my characters hold opinions that were typical of the late 1960s; I have tried to express their ideas in language that they themselves would have used. I have also tried not to give any of them opinions that would have been impossible or unlikely for anyone to hold at the time. The extent to which sixties radicals felt alienated from mainstream American society cannot be overemphasized; many of them believed that everything they had ever been taught was, at best, a web of pitiful delusions, and, at worst, a cleverly assembled system of malevolent lies designed to maintain an intolerable and utterly mad social order. That conviction led to an assault, not only on social institutions, but on the very structure of “reality,” forcing radicals to attempt to reinvent all human knowledge from the ground up—no mean task for kids in their twenties—and no idea, on the face of it, was too nutty to be considered, at least for a while.

With the exception of Simone de Beauvoir’s The Second Sex (first published in an English translation by Jonathan Cape in 1953) and Betty Friedan’s The Feminine Mystique (1963), none of the books that would now be considered to be classics of mid-twentieth-century feminism had yet been published at the time when Looking Good is set. Even the use of the term “feminism” (as applied to a contemporary position) was quite new, and one heard “women’s liberation” far more often. It was very much a do-it-yourself period in the Women’s Movement, and young women were making up feminist theory on their own, coming up with new ideas every day. The huge energy and excitement of that intensely creative period was readily apparent even to men who were watching from the sidelines.

It should be obvious that I am sympathetic to my characters, but I have also tried my best to absent myself from the debate. Whether I have succeeded or not is another matter, but it was my intention that readers should confront my characters as directly as possible without the author getting in the way.

I am often asked why, in Looking Good, I switched John Dupre’s first-person narrative to the third-person and introduced a new first-person narrator—Tom Parker. The late 60s was when we were discovering that “the personal is the political.” I felt that I needed the third-person distance from my protaganist as well as an entirely different viewpoint to enable me to explore the web of social interconnections as the personal was being swept up by the political.

MY NAME’S Tom Parker, and I was born and raised in Hubbard, North Dakota. I tell people that, and they say, “What’s it near?” and I say, “Shit, man, it ain’t near nothing,” and sometimes they keep on going and say, “What’s the nearest big city?” and I say, “Well, if you want to drive for a while, you can hit Bismarck,” and that usually stops them. When they were dividing up the states, they should have gone east-west on the Dakotas, not north-south. The eastern half’s as flat as a breadboard, but the western half, where I come from, is more like what people think the West ought to look like—like rolling hills, grassy buttes, and a whole shitload of beef cattle. We’ve even got a cowboy or two, and when I was a kid, I spent half my life attached to the back of a horse, and that’s not a bad way for a boy to grow up.

I’ve got nothing against my home town, but how you got out of the service in those days was like this—when your time was up, BINGO, your time was up. One day you’re in Saigon, and the next day you’re sitting in an airport back in The World thinking, Jesus, when did the skirts get so short? and the day after that you’re restored to the bosom of your family. Now I don’t want to make myself sound even crazier than I was. I knew perfectly well I was back home and perfectly safe, but I kept having this FEELING. It’s hard to describe. And here’s the crazy part. The only thing that would have made that feeling go away was if I was absolutely certain the SPs had secured our perimeter. Sometimes I’d go outside and stare at the sky. When that got too harsh, I’d come inside and stare at the wall.

I’ve got a lot of relatives. Both my mom and dad come from big families, so I’ve got aunts and uncles and cousins galore. My old man was married twice, so I’ve got two half-sisters a lot older than I am, and they’re both married. Then I’ve got two full sisters a few years older than I am, and they’re married too. Then I’ve got a younger brother who was in his senior year of high school when I got out of the service. Anyhow, that’s a lot of people. And do you think a single one of them would sit down with me, look me in the eye like they was interested—you know, like they gave a shit—and say, “Well, Tommy, how was it over there?” Nope, not a one of them. I’ll tell you what it’s like. It’s like while you’ve been gone, you’ve turned BRIGHT COBALT BLUE, and when you come back, everybody can see immediately that you’ve turned BRIGHT COBALT BLUE, but nobody ever talks about it.

All except for my old man. He likes wars. He enjoyed the hell out of the one he was in, which wasn’t too hard considering he was stationed Stateside the whole time, and he was real interested in the one I’d been in, so there I am trapped in the house with him in the dead of winter, and he keeps telling me that we can still win it over there, and I kept telling him we’re never going to win it over there, and Abrams has his head even farther up his ass than Westmoreland did, and none of those dudes have seen daylight recently, let alone the light at the end of the tunnel, and I should know, because, goddamn it, I’D BEEN THERE. Which was true. When Charlie pulled off his world-famous Tet Offensive, I’d been right there to catch his act, and believe me, his act was highly entertaining. So every night I’m fighting the war with my old man over dinner, and it’s not lots of fun for my mom and my brother, and when you get right down to it, it’s not lots of fun for me either.

I’m kind of slow on the uptake sometimes, but it was beginning to dawn on me that maybe my future in Hubbard, North Dakota, was a little bit on the limited side, and then something happened that made it real clear. I’m laying in my bedroom staring at the ceiling. I hadn’t made it downstairs to stare at the kitchen wall yet. And my brother comes in, you know, just goofing off, trying to be friendly. Like he don’t know me anymore. And he says something. Now I’d love to tell you what it was, but it’s gone out of my mind. I know this much about it—it was supposed to be funny, and I didn’t think it was funny at all. It could have been something like, “Hey, Tom, did you kill a lot of slopes over there?” but that isn’t what it was—although that was probably kind of like the gist of it. But here’s what happens. One minute I’m sitting on the edge of my bed, and then the next minute I’ve got him rammed up against the wall, and I’m about to pound him out. Got my fist cocked, all set to go, right? And I catch myself at the last possible second. And I step back and let him go, and he’s looking at me like his worst fears have come true. Here he is, folks, appearing right before your eyes, alive and in full color, three dimensional and forty feet tall—THE WAR-CRAZED VIETNAM VET. “Fuck! Tom,” he says, like amazed, and he’s gone.

I’m standing there, and I swear to God sweat is just pouring off me, and I’m panting like a dog, and I’ve got that good old accelerated heart rate, and I’m thinking, oh, fuck. That’s when I knew I had to get out of there. Well, I went outside and walked around in the cold for a while, and then I came back and walked into my brother’s room. He’s laying on his bed, reading a book, homework or something, and he looks up. I can see he’s really scared of me, and I feel like a piece of shit. But I want to make sure he gets the point. Like the point is the point. “You registered for the draft?” I say.

“Yeah,” he says, like what are you asking me such a dumb question for?

“OK,” I say, ‘I’m going to give you some advice. I don’t give a shit whether you want to hear it or not, I got to give it to you… for the simple reason that I know some things that you don’t. Now let me ask you something. When you drive north from here, where do you end up?”

“OK, let me put it a different way. When you drive north from here, where do you end up?”

He looks at me blank for a long time. Then he says, “Shit, Tom, what are you talking about? You drive north from here, you hit the Reservation.”

“Shit. If you keep on going, there’s nothing. You end up at the Canadian border.”

I’m a great one to talk. I enlisted.