The darkest of Keith Maillard’s novels, Motet is “sung” in three radically different voices. Paul, a professor of musicology, is researching a sixteenth century motet and finding a nightmarish story of heresy, persecution, torture and death. Steve, a rock drummer, longs for the “sainthood” of Hendrix, Joplin, or Jim Morrison, but remains haunted by a drug-related murder in Boston’s 60s underground. Kathy, a failed jazz musician and Steve’s deserted wife, is living a life of quiet desperation. These three are drawn together by precocious teenaged Wendy, Paul’s daughter and Kathy’s student. Just when Kathy is beginning make a new life with Paul, Steve reappears with disastrous results.

Reeking with sex and violence, Motet is a nerve-wracking bravura performance that ultimately offers the hope of spiritual redemption. It won the Ethel Wilson Fiction Prize in 1990. 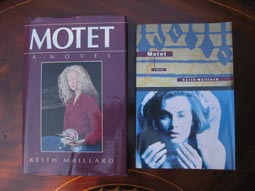 Partway through writing Motet, I was afflicted with writer’s block and couldn’t write much of anything for nearly two years. When I could write again, I discovered that my most recent draft had gone in an entirely wrong direction, so I had to throw it away and return to an earlier draft. Motet was published by Random House Canada in 1989 and reissued by HarperCollins Canada in 1997. It won the Ethel Wilson Fiction Prize (The B.C. Book Prizes) in 1990.

“Behind each word, each sentence, you can feel the blood coursing, the flesh breathing and the sinews tensing…. Maillard writes a damn good story.” – The Toronto Star

“Large and brave, readable and provocative.” – The Globe and Mail

Steve lit a cigarette. His hands were quite steady. Now that we’ve scared the bat piss out of each other,” he said, “why don’t you put that knife away and let’s forget we ever mentioned it.”

The girl smiled slightly. “There’s something else you can do with a knife, you know.”

“You can cut a man’s throat while he’s asleep.”

“Man would be a fool to go to sleep then, wouldn’t he?” Steve felt the flesh on his face drawing back into something like a grin. “Come on, give it up and we’ll call it a draw.” The girl didn’t speak. “Look,” Steve said, “all I’m trying to tell you in my half­assed way is to be careful who you show that thing to. You go around picking up men at parties and eventually you’ll hit some psychotic who hates women and you’ll bring him up here and show him that damned thing and he’ll end up carving you for dinner.”

The girl was sitting stiffly with the knife cradled in the palm of her hand. “How about you?” she said. “Do you hate women?”

Steve stood. The girl was already on her feet, fast, despite the heels, uncoiling, crouched, the knife tense and ready. Steve pushed his hands into the air, palms out. “Look,” he said, “I’m going to walk very slowly around the far side of the room, as far away from you as I can get, and when I get to the door I’m going to walk right through it and down to the street and that’s the last you’ll see of me. All right?”

The girl’s mouth was drawn back, open, showing teeth. “Oh shit!” she said, “this is really fucked. How the hell do we stop it?”

No games in that voice now, Steve. Maybe. But then again she could be as crazy as one of Charlie Manson’s girls. “Anything we’re saying now could be more bluff,” he said. “You know that. So somebody’s got to give up. I guess it’s got to be me, right?.. I’ll do it. Just tell me how.”

The girl thought about it. “Take off your clothes,” she said.

So here it is, right? Getting down to it. Sweat pouring out of your hairy armpits like acid. If you do it fast, maybe you can make it down to the bare skin without shaking like a branch in a gale. Strip off the coat and toss it across the room, toss the shirt on top of it. Odds are good but not perfect. What you’ve got riding for you is what you heard in her voice, but still she could cut you twenty times before you could take that damn thing away from her, and when you’ve got two strangers standing there assuring each other with sincerity dripping off the edges “I’m not psy­chotic,” chances are at least one of them’s flaming nuts. Pull off your boots and expose your squashable feet. And pull off your socks next because they don’t count. But you love a good disaster, man, it’s the only time you can function. Step out of the jeans and throw them away. Don’t hedge. You couldn’t get the belt out of the loops fast enough. If she’s coming in, it’ll be when you’ve got the T-shirt over your head. Fast. Cut deep into your stomach. But no, she hasn’t moved, still just watching. Throw away the shorts and it’s done, ready to make your exit taking nothing more than you came with, what they read at Peter’s funeral. And you can’t stop shaking.

The girl closed the space between them, walking slowly, her eyes fixed on Steve’s face.

So slowly that it’s like a ritual, something out of a sick Leonard Cohen song. But she’ll telegraph it sure as shit. You’ll have to jump left fast, out of the way, pivot and back in, knock those pin heels out from under her. Easy. Then go for the chair and you’re home free.

The girl had stopped just a few inches away. Steve forced himself to continue staring into the ringed, fixed eyes where he knew the tip-off would come. The fear felt like iron. The girl folded up the knife, hiding away the cutting edge, and pressed it into the palm of Steve’s ready hand. Steve threw the knife away, heard it arrive, sharp, on the linoleum.

The easiest thing to do, the only thing to do, was take her into his arms and feel the narrow chest, ribs and backbone hard as glass beads just under the thin sheath of skin. They were both shaking, they both stank of fear. Steve felt lips, tongue, teeth pressed into his shoulder, stopping up sound. A hurried knock­ing where their chests were pressed together. “Look,” Steve said, “if you cut my throat while I’m asleep, do it fast and deep, OK?”