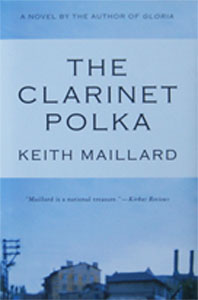 The Clarinet Polka is the seventh novel I set either partially or entirely in my fictional town of Raysburg, West Virginia. In the course of writing those books, I gradually became aware that I was attempting to create a large, complex portrait of Raysburg from many points of view and that to do so, I would have to write about the Polish-American community in Raysburg. I didn’t feel adequate to that task, but my dreams and memories wouldn’t let me alone—a particular skein of memories as vivid as a movie. I’m young again, and I’m in a bar down by the river. All my buddies are there, and we’re chugging down the beer and yelling at each other. We’re in that back room in my mind where I can always go to visit no matter how old I get. I’m sixteen or seventeen again, laughing; I’m smack in the center of my youth, dancing with a grinning girl from the next table. I’m pumping quarters into the jukebox to keep the music coming. Every song on that jukebox is Polish, so I don’t have a clue what I’m playing. All I know is that never in my life has music sounded so good. 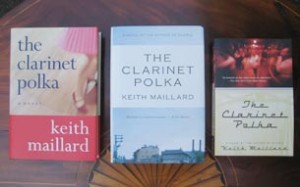 Writing The Clarinet Polka made me the happiest I’ve ever been working on the book—immersing myself in Polish-American polka music. And the saddest—researching the Second World War in Poland.

I felt both honoured and humbled when, in 2005, the Polish American Historical Association awarded me their Creative Arts Prize for The Clarinet Polka. That prize belongs to the Polish-American community in my home town as much as it does to me.

Okay, so here’s Linda’s story, the best I remember it. When she was about ten, she went to the Pączki Ball at the parish hall, and there wasn’t anything unusual about that—she’d been going to things at the church with Mom and Dad her whole life—but it was the one and only time that Li’l Wally Jagiello ever played in South Raysburg, and it was also the first time they’d had a real good, red-hot, pure Polish polka band playing at St. Stans since before the war. I have no memory of this whatsoever. I don’t know where I was—probably off with the boys somewhere pretending I was a South Raysburg Rat—but anyhow I missed it. Linda sure didn’t. If she had to list the most important events of her life, it’d be right up there, not far below her first Communion and getting married and having kids.

Li’l Wally was this little guy in checked pants. He played the drums, and he was absolutely nuts. He was banging away on the drums and belting out all these songs in Polish and yelling in that way musicians do to get the dancers going Hop, hop, hop, hopla!—and just yelling period, high-pitched yips and yelps. Now Linda had been playing the piano since she was six and she was already up to some high level at it, and whenever there was any kind of concert anywhere in Raysburg, Mom always took her to it. So Linda was used to seeing guys read music, but with Li’l Wally’s band, there was not a piece of music to be seen, and that really impressed her. She thought it was amazing that the guys had all those tunes in their heads. They had a trumpet and a clarinet and I don’t know what all—a concertina probably—and they were just wailing away like crazy, sweat pouring down their faces, and the people in the hall were going berserk.

The place was packed and the word had gone out, so there were people piled up outside trying to get in, and they threw open all the doors even though it was a cold night because they just had to get some air through there. People dancing like total fools. Old folks jumping up and dancing who hadn’t danced in years. Young kids dancing on the tables. A couple Raysburg cops showed up thinking there was a riot going on, and they ended up sticking around and dancing their asses off, and they weren’t even Polish. The beer was flowing by the gallon, and the people in the back were eating up a million pączki, and even Father Stawecki was grinning ear to ear—and it took a lot to get him grinning, believe me.

Just like me, Linda had grown up hearing polka music, but she’d never heard anything as wonderful as that. She said the music burned straight through to her soul. Everybody loved everybody, people were hugging each other, people were weeping for joy, and when Linda saw that, she started crying too, and she was standing there with the tears running down her face, and Old Bullet Head leans down and whispers in her ear, “Hey, Lindusia, I’ll tell you a secret. This is the real thing.” She said she’d never in her life been so proud of being Polish.

So what Linda learned the night Li’l Wally played the parish hall was that there was a kind of Polish music that was unbelievably wonderful, and the minute Polish people heard it, they knew what it was, and that was what her father had told her it was—the real thing.

1 thought on “The Clarinet Polka”