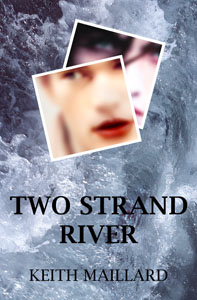 Boyish Leslie, a retired competitive swimmer turned children’s librarian, and girlish Alan, a fashionable hairstylist, are living parallel lives of thwarted desire, but soon they will be utterly transformed as the middle-aged shaman, Mildred McKenzie, opens the crack between the worlds and hurls them into an alternate reality.
Originally published in 1976, Two Strand River is one of the earliest literary novels to star transgender characters. Reprinted twice, it has long been considered a cult classic and led the assault on the “gender binary” thirty years before that term was in common use. Saturated with folklore, mythology, and fairytale allusions, the book takes the reader on a fantastical trip through the gender mirror.

Go to top
I began my literary career known as the author of that weird book. Press Porcépic, a small literary house in Ontario, published Two Strand River in 1976. I’d known that my cross-gendered protagonists were bound to disturb some people, but I was surprised at just how disturbed some of them were. The first reviewer chosen by Books in Canada sent the book back to the editor with words to the effect of, “I simply can’t do it,” and most of those who did review the book had never seen anything quite like it—and said so—but it acquired a cult following over the years, came to be labeled “a classic of Canadian magic realism,” and has been reprinted twice. When the HarperCollins edition was published (1996), Kirkus Reviews called Two Strand River, “one of the best gender-bending novels now in print.” 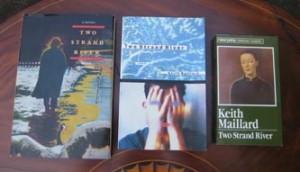 Two Strand River also launched me down the rocky road toward learning to be a screenwriter. “Hey, that book would make a great movie,” was something I was used to hearing, and I thought so too, but adapting the book to the screen turned out to be excruciatingly difficult. I lost track of the number of times I rewrote the screenplay, but I know it’s well over a dozen.

My screenplay for Two Strand River won the Praxis Competition in 1986 (Praxis Film Development Workshop, Simon Fraser University, Centre for the Arts), was optioned by Once and Future Films, and made it as far as pre-production before our funding dried up. Studying screenwriting is one of the best things a fiction writer can do, and I’m really glad that I got the chance to do it.

“Although genetics can’t save the day, magic realism does, and the concept of gender becomes at first fluid, then meaningless, then finally redemptive in some way that can’t be and probably doesn’t need to be explained too coherently…. One of the best gender-bending novels now in print.”